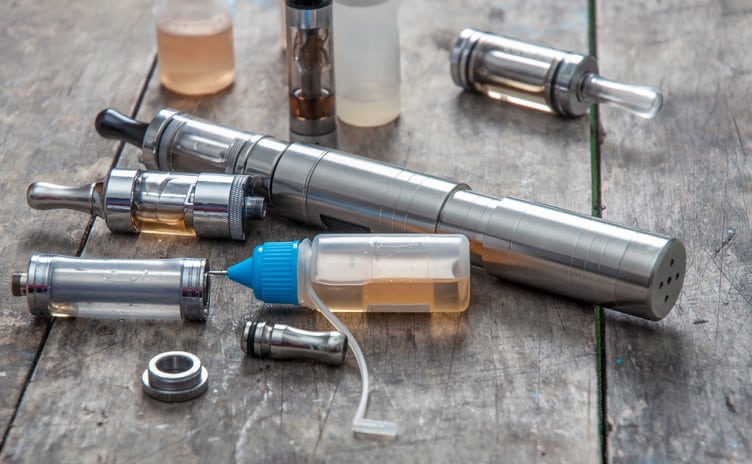 Vaping has become a popular alternative to smoking and although it is the newest thing, the question arises “is it safe or safer?” We are now beginning to see vaping related illnesses and vaping related deaths which are leading people to re-think vaping. Vaping / e-cigarettes were first introduced in 2007 and has become a trend in the middle school and high school scenes. These products are often sold as vaping pens and are available in a variety of flavors and contain a very high dose of nicotine. According to the product makers of e-cigarettes, one pod or flavor cartridge contains the same amount of nicotine as one pack of cigarettes. Some even have the ability for people to add their own liquids (which may be illegal drugs) to vape.

E-cigarettes are devices that heat a liquid into an aerosol that the user inhales. The liquid usually has nicotine and flavoring in it, and other additives. The nicotine in e-cigarettes and regular cigarettes is addictive. E-cigarettes are considered tobacco products because most of them contain nicotine, which comes from tobacco.

Besides nicotine, e-cigarettes can contain harmful and potentially harmful ingredients, including:

Among young people, electronic cigarettes or e-sigs have become more popular than traditional tobacco products. In 2015, the U.S. surgeon general reported that e-cigarette use among high school students had increased by 900 percent; and more alarming still that over 40 percent of those users had never previously smoked tobacco. This is in part due to the belief that vaping is not harmful or at least less harmful the traditional smoking. But is this true?

There are still many unknowns about vaping and variables to wht you may be vaping. This includes the chemicals that make up the vapor and how they affect short and long term health  “People need to understand that e-cigarettes are potentially dangerous to your health,” says Blaha. “You’re exposing yourself to all kinds of chemicals that we don’t yet understand and that are probably not safe.”1

According to Michael Blaha, M.D., M.P.H., director of clinical research at the Johns Hopkins Ciccarone Center for the Prevention of Heart Disease1, there are three reasons e-cigarettes may be particularly enticing to young people. First, many teens believe that vaping is less harmful than smoking. Second, e-cigarettes have a lower per-use cost than traditional cigarettes. Finally, vape cartridges are often formulated with flavorings such as apple pie and watermelon that appeal to younger users.

All Ages seem to find the lack of smoke and the smell associated with regular cigarettes appealing;  this also may reduce the stigma of smoking.

“What I find most concerning about the rise of vaping is that people who would’ve never smoked otherwise, especially youth, are taking up the habit,” says Blaha. “It’s one thing if you convert from cigarette smoking to vaping. It’s quite another thing to start up nicotine use with vaping. And, it often leads to using traditional tobacco products down the road.”

What can parents and employers do?

Many parents as well as some employers are now looking for ways to identify when someone has been vaping. Some laboratories are now offering testing throug hair sample or urine to determine whether someone has been vaping. National Drug Screening now offers both hair and urine testing for vaping. To find out more you can click this link, order a vaping test, or call 866-843-4545.

Vaping Panel Includes: Nicotine, Cotinine, Propylene, Glycol, Glycerol And flavorings. This test may be conducted with hair or urine.