In this video of the NDS Video Blog series, Joe Reilly discusses eCCF – electronic custody and control forms for both DOT and nonDOT testing plus how it’s changed the face of the drug testing industry. eCCF means, no more paper forms for drug testing!

Paper is out and Electronic is in simplifying the drug testing process for employers and individuals. It is now faster and easier to order and schedule drug testing with greater accuracy and reduced data errors that may result from multipart forms.

2) What the benefits of eCCF are

3) How easy it is to use or switch to eCCF

Click to find out more about newly available DOT eccf . 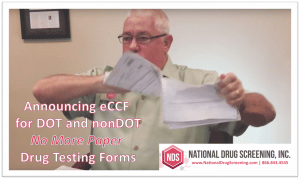 e-CCF is an electronic version of the traditional 5-part paper Custody and Control Form which is the document used for drug test ordering, specimen collection processing, and chain of custody documentation for drug testing. The custody and control form is used to document the handling of the drug test specimen from the time it is collected until it is received at the laboratory.