In this edition of Inside Drug Testing, we talk about “Fact, Fiction, & Fake News”. Every day there are stories in the news and on the web related to false positives drug tests, marijuana and CBD, and drug testing. Some of the more recent stories include a woman having her newborn taken away at the hospital due to a false positive drug test, an executive losing their job for testing positive for CBD, or someone not getting hired because of having a prescription for marijuana. It is often difficult to distinguish fact from fiction, so let’s shed some light on false positives, instant drug tests, and CBD Marijuana positives.

Let’s start with a story about an Alabama woman whose baby was taken away from her four hours after delivery because she tested positive for opiates. One of the story headlines was “Alabama mom’s newborn taken away after false-positive drug test”. Putting aside the why of her being drug tested in the first place, this was a terrible situation that would never have happened if the drug testing was done correctly.

Unfortunately, many doctors have a poor understanding of drug testing as evidenced in this case. The doctor was quoted as saying, “Screening tests can have what we call false-positive results where other things can interfere. You can have a substance that a patient eats. Like in this case, poppy seeds can make them test positive for opioids.” Well, that would be true if using an instant test, getting a positive initial screen, and then failing to use GC/MS for a confirmation test.

Instant testing may be reliable for negative results, but any non-negative initial screens should always be sent to the Laboratory for GM/MS confirmation testing.  Using recognized cut off levels and confirmation testing serves to minimize if not eliminate false-positive results. This should be a lesson to both doctors and employers using instant testing kits. Always confirm the test results at a certified laboratory and employers should also make use of a Licensed Medical Review Officer to determine if any legally prescribed medications or medical conditions could have been the cause of a lab-confirmed positive result.

Speaking of “legally prescribed”, every day I see a google alert about a story of someone who was fired or not hired because of being “prescribed marijuana”. While it may be a sad story that someone lost their job or had some other consequence for using marijuana, you can be 100% certain that it was not because of a legal prescription since Marijuana cannot be legally prescribed. It is important to make clear that some of the people involved may have real issues or even a debilitating disease and that we are only discussing the reporting of facts related to drug testing not whether any types of accommodations should have been made for the person.

Medical and recreational Marijuana is illegal according to Federal Law but has been legalized in different forms by several states. Some States allow smoked marijuana and others do not. Some have limited the THC levels or who can have access to marijuana. Laws vary greatly making it a challenge for employers to know how to proceed. Then you add in those claiming they tested positive from marijuana due to using only CDB, which is unlikely in most cases but possible. CBD from Hemp that contains less than 0.3% THC is legal Federally. So how does an employer address these complicated issues?

The answer is careful. There are a number of states with employee protection laws such as ones prohibiting an employer from restricting an employee from certain jobs, disciplining the employee, or taking adverse action as a consequence of an employee’s use of marijuana (with or without legal, medical authorization).  These states that have legalized medical marijuana or have added recreational use of marijuana have created valid safety concerns for employers because as we know, marijuana can affect the psychomotor skills and cognitive abilities of an employee. It is critical that you know the laws that may affect your company, keep abreast of any legal changes, and keep your policies and procedures accordingly. Read More on Marijuana Laws here

No matter what the topic, beware of taking the stories your read and hear as fact. Even those quoted as experts, may not really know what they are talking about and even if they do, quotes and “facts” may be taken out of context or incorrectly applied to a given situation. Just because you “google” something does not make it true. Fortunately, for employers, there are some great resources available to get the assistance you need to make the best decisions possible based on fact, not fiction or fake news. 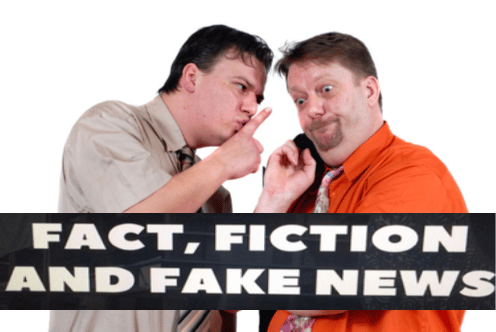