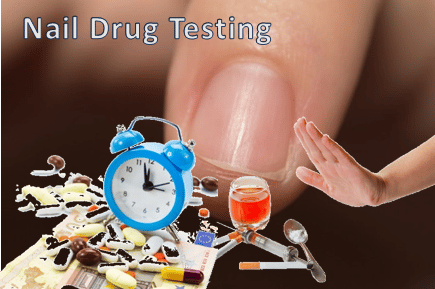 While fingernail testing is not the most common drug test specimen, there are some instances when it is the best choice. Fingernail and toenail specimens, unlike urine or oral fluid samples, yield information about drug exposure time frames measured in months, rather than days or hours. Drugs can be identified in nail clippings beginning two to four weeks following ingestion. A fingernail specimen when combined with nail shavings can reveal up to approximately 6 months of collective history of drug exposure and when combined with toenails up to 12 months of history. Urine, on the other hand, for a drug like cocaine, can only yield about three days of prior drug exposure history. Each specimen type has its own look back period from a few hours up to 12 months. Like urine and hair drug screens, fingernail and toenail testing is available in multiple drug test panels.

The same drugs that can be detected in samples like urine, oral fluid and hair can also be detected in nails.  This means when that employee or candidate shows up for their drug test bald with their body completely shaved, we can still complete an accurate test on them.

As you will see in this video, all ten fingernail or toenail tips are clipped first.  The detection period from clippings only is for 30 days, 6 months ago.  Do you want to know if someone was using drugs during the entire six month period?  If so, the collector will then lightly shave the surface of all ten nails.  The detection period between the lunula (the “white moon” of the nail) and where the clippings ended is about 5 months.

Here are a few frequently asked questions about fingernail and toenail testing.

What is the window of detection in nail samples?

Drugs can be identified in fingernails when combined with nail shavings up to approximately six (6) months after the last usage. Toenail clippings show over one year of drug use.

How much needs to be collected?

The minimum amount of nail clippings needed is 40 milligrams. 100 milligrams is optimal. It is recommended that collectors use a scale to insure sufficient collection for testing.

How do drugs get into nails?

Drugs are distributed via the blood supply to the nail cells and the nail bed. Nails grow not only in length but in thickness as well. As the nail grows in thickness, it creates layers of drug history.

1. The Collector should have the following tools and supplies on hand prior to beginning the nail specimen collection:

2. The Collector must thoroughly clean the nail clippers and scissors by rubbing them with an alcohol swab, observed by the Donor.

4. Clip Donor’s nails from all fingers or all toes onto clean paper. Clip the nail halfway across the nail, then peel the nail the rest of the way to keep the nail from “popping” off and getting lost or onto an unsterile environment.

5. The Collector must then use a clean pair of scissors and scrape the surface of the nail to collect shavings from the nail surface. Hold the scissors at a 33 degree angle and scrape from cuticle to the tip. Use a quick scraping motion and make sure not to scrape too deeply to prevent injury to the client. The Collector must collect the scrapings from the entire nail surface of all ten (10) fingernails or toenails with the nail clippings and place in the foil pouch contained in the Nail Collection Kit.

6. Fold and close the foil pouch around the nail sample and place it inside the Nail Collection Kit.

7. Ask the Donor to print his or her full name and social security/I.D. number, as well as initial the certification, in the appropriate blanks listed on the Nail Collection Kit flap.

8. The Donor and Collector must initial the tamper-proof seal once it has been placed over the edge of the Nail Collection Kit.

9. The Collector must fully complete the chain-of-custody (“COC”) form with both the Donor’s and Collector’s information, as requested. The Collector must identify what toxicology test is being performed on the nail specimen on the COC form. The Donor’s social security/I.D. number on both the COC and Nail Collection Kit envelope must match.

10. Place the completed COC form and the sealed Nail Collection Kit into the plastic transport bag, then a courier envelope. Seal each respectively and ship it immediately for testing.

Note: If the client is a diabetic it would not be prudent to do their toenails. It is recommended that diabetics only have their toenails clipped by a professional, such as a Podiatrist. There is greater chance of infection and injury clipping the toenails of a diabetic Donor. Improper nail care and or injury to the nail in diabetics can lead to infection, gangrene and loss of digits or limb.