What is a Split Specimen Request?

Over the years there has been misinterpretations by Medical Review Officers (MRO) and Designated Employer Representatives (DERs) combined with court challenges. This article will focus on a split specimen retest in a DOT drug testing program.

Check out an interesting split specimen situation on our FAQ.

The concept of split specimens came into place with the passage of the Omnibus Transportation Employee Testing Act (OTETA) in September 1991.  This Act put not place the requirement for an employee subject to DOT testing the right to have a split specimen collected and tested.  Prior to OTETA passing, the use of split specimens was allowed but there was not very much in place for the handling of specimens and the test results.

The rewrite of 49 CFR Part 40 put an end to all this confusion making it mandatory for all personnel subject to Department of Transportation drug testing regulations.  There was clear guidance on what to do and how test results were handled.   But even with that problems still exist with the use of split specimens.

The question is why problems are there still problems.  People make decisions on that they think they know and not what is actually stated in the regulations.  For instance, the donor owns or has control what happens to the Bottle B.  The MRO, DOT, nor the employer can request an analysis of the split. That is the decision of the donor and nobody else, The MRO role is to facilitate the analysis of Bottle B once a request is made to have it analyzed.  This request is required to be made within 72 hours from the time that the donor is informed by the MRO that a non-negative test result has been received. Documentation is very important all events for the split testing.

The regulations in 49 CFR Sub-Part H are very prescriptive in how a split specimen is to be handled from the time of receipt by the laboratory doing the analysis to the end of the testing process if requested by the donor.

Some real confusion arises is when there is no Bottle B available for analysis. That can happen in the following instances:

1. The collector did not divide the specimen two separate vials and the donor has left the collection facility.  Both vials are shipped to the laboratory, one is empty.

2. The donor is requested to return to the collection site and supply another specimen to fulfill the split specimen requirement but the donor refuses.  That is not a refusal*

3. Bottle B leaked in transit to the original testing laboratory.

4. Bottle B leaked in transit to the laboratory selected to do the testing n Bottle B.

Note Item 2:  This is not a refusal to test and the donor has every right to refuse to test. /the purpose is to have an analysis of the Specimen in Bottle A, not do another specimen collection and label that specimen as bottle B.

What happens if there is no specimen in Bottle B.  The MRO is required to notify the DER that the first test is canceled and that a direct observation collection is to be done immediately.as directed in 49 CFR Part 40.201(e).

The issue of split specimen testing is serious issue.  If confronted with this issue, do not second guess but read 49 CFR 40 subpart H.  If you cannot find your answer there contact the Office of Drug and Alcohol Policy and Compliance for direction on what to do. 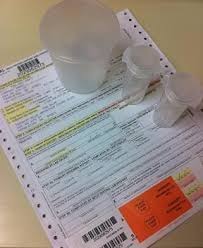