For many years, testing for drugs was done primarily through urine sample collection and analysis. This is still one of the most common ways to get tested for drugs because it is still incredibly accurate, and not too invasive, compared to other tests, such as blood test.

However, there’s another way to test for drugs known as the hair follicle test, and it’s got plenty of uses and options for people.

Hair follicle drug testing doesn’t test only the follicle, which is why it might be more appropriate to call it a hair test. A hair test requires hair that is a minimum length of 1.5”, although longer strands, such as 3” or more, can yield even more comprehensive results.

A hair test is looking for the same thing as a urine test, and that is the presence of metabolites. Metabolites are molecules leftover after a substance has been processed by the body. Different foods, liquids, and narcotics all leave behind unique metabolites, and science has learned to recognize these.

The key benefit that hair testing provides is a more comprehensive look at the lifestyle of someone being tested. Testing for marijuana, for example, is still very accurate for urine testing, but will only yield an accurate result if someone has used marijuana within the last 4-6 days. After that period, the metabolites will no longer appear in the urine.

With hair testing, however, metabolites are deposited in the hair and remain there much longer. A typical 1.5” sample, for example, can show the use of marijuana up to 90 days, or three months. If you get a long strand of 3” or more, the right test can even show if the use has occurred within the last six months.

Hair testing is available in the same types—more formally known as “panels”—of drug testing as urine and oral fluid tests. 5-panel tests include testing for common drugs like marijuana and cocaine, while additional panels such as 9 and 14-panel tests expand the range to include other drugs such as prescription medication like methadone, or benzodiazepine.

ETG testing is another option for hair testing, but in this case, ETG, or ethyl glucuronide, is the metabolite that indicates alcohol consumption. Here, the window for a urine test is even smaller, only able to test within 4-6 days of consumption, whereas the hair test, again, provides results for up to 90 days.

Hair and alcohol drug testing is growing in popularity due to the ease of collecting samples, and the difficulty in cheating results. Test administrators can be present during the specimen collection, unlike with urine samples, where there is a danger of switching out samples or diluting test results by drinking a lot of water beforehand.

As a result, DOT compliance, workplace drug testing, and even court-ordered tests are all finding that hair testing is often an acceptable and even preferred choice when it comes to taking a test and getting the results back. If you’re looking at drug testing for yourself or work, think about this option. 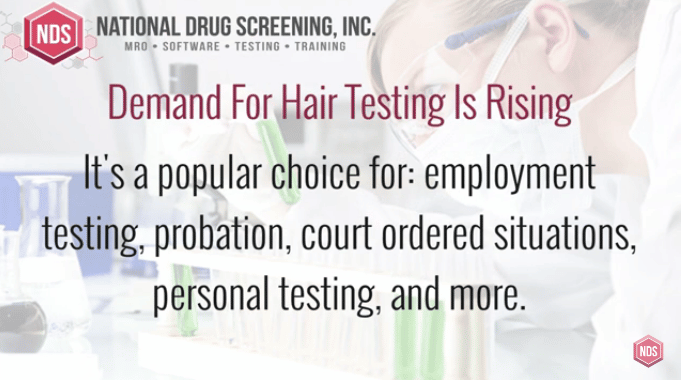