Business owners and managers find themselves grappling with social acceptance for marijuana while understanding the need for a safe and drug-free workplace.

A growing question, is marijuana medicine? THC is not a medicine. This is a point to be very clear on. Carcinogenic intake of marijuana does not contribute to healing, health or wellness. This is partly why marijuana has repeatedly been declared to have no medical value by major medical associations such as the American Medical Association, American Cancer Society, American Academy of Pediatrics, Institute of Medicine, and the American Society of Addiction Medicine, among others. But the issue is greater than that. Crude marijuana (or the raw plant) has never passed the rigorous safety and efficacy requirements of the U.S. Food and Drug Administration which looks for things such as toxicity, carcinogens, other impurities and potential for harm (Stuart Gitlow, MD, 2013). To quote Dr. Bob DuPont of the Institute for Behavior and Health, “You don’t smoke medicine. (DuPont, 2014)”  This has been made repeatedly clear in research, reviews, position statements, court challenges and the classification of crude marijuana in the United States.

Most employers can benefit from a drug/alcohol testing policy. Drug testing (including options such as reasonable suspicion, pre-employment, periodic and/or random drug testing) can help save many employers from headaches and performance problems, and even help reduce or avoid accident-related liability, too. Savvy employers work with employment law counsel to craft the policy/approach that’s best suited for their particular workplace, and to give their employees plenty of notice before implementing changes to their policies.

Some employers are asking, Should we “lighten up” about marijuana—i.e., should we stop drug testing?

Not such a good idea, if you had good reasons for drug testing in the first place (workplace safety/health, etc.), new medical and recreational marijuana laws don’t take those reasons away.  Of course, some employers have considered making exceptions for medical marijuana use. As with any exception, be mindful of safety/business risks and the possibility of exposure to claims for discrimination. Consistency is key: if you’re granting the exception for some but not all employees, that can create an opportunity for an employee to argue they were treated poorly based on a discriminatory motive.

For companies operating a drug-free workplace program remind employees that existing drug-testing policies haven’t changed, even in states where marijuana has been legalized for medical or recreational use.  Employee must understand that if they test positive for marijuana they can face disciplinary action that can include a written reprimand, suspension without pay, rehabilitation, or termination, according to the agency.

Employers should tighten up their drug-free workplace policy and address medical and recreational marijuana laws.  Failure to do so can result in significant exposure to liability.

National Drug Screening can provide assistance with drug free workplace policies, give us a call at 866-843-4545. 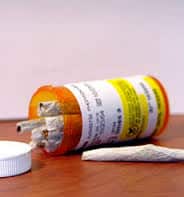