The immediate supervisor of the employee is the only person that can made this call.  However, there is a major requirement in place. The requirement is that the supervisor who is making the determination has to be trained in accordance with the regulatory requirements, 49 CFR part 392.607.

This required training is to be a minimum of 60 minutes for controlled substances and an additional 60 minutes for alcohol misuse. The core topics that should be included in this training are almost all behavioral training, which shall as a minimum, include indicators of speech, behavioral, physical signs and job performance signs that point to use of controlled substances or alcohol misuse.  This training is directed to be given to the frontline supervisors who have day to day interaction with the employees who are in safety-sensitive positions.  While this training is not required to be recurrent or every so many years, it is recommended that supervisors be trained every so many years at the discretion of the employer.

If a motor carrier company employs a new supervisor for the CDL holders, that new supervisor shall be given required training even if they have previously received that training.  The training while including the required elements as stated before, should also include policy training-and awareness for that company.

A supervisor is required to make a determination to test is when there is specific, contemporaneous, articulable observations concerning the appearance, behavior, speech or body odors of the driver.  In addition for controlled substances, this may include signs or effects of withdrawal from the use of controlled substances.

The other part of these strict requirements is that a reasonable suspicion alcohol test has to be conducted within defined time frames.  This includes observations made by the immediate and trained supervisor.  These observations have to be made during, just preceding, or just after the performance of safety-safety defined functions.  When a driver has been directed to undergo an alcohol test, the actual test has to be conducted while the driver is performing safety-sensitive functions, just before the driver is to perform safety-sensitive functions, or just after the driver has ceased performing such functions.

If the alcohol test is not performed within two hours of the determination, a record shall be prepared and maintained with the reason(s) why the test was not administered.  A time frame is then allowed of up to 8 hours for the test be performed.  Records are to be kept if the test is not conducted after 8 hours have elapsed since the determination was made.

Even if there is no reasonable suspicion alcohol test performed, the driver shall not be allowed to report for duty or allowed to remain on duty.  This is because there are still indicators of alcohol use that have been documented and in the record.

An employer shall not permit the driver to perform or continue to perform safety-sensitive functions, until one of the following events have occurred:

It has to be noted that an employer cannot take any adverse action against a driver because of the driver’s appearance or behavior in respect to alcohol use when no alcohol test has been conducted.

All records must be made and singed by the observing supervisor within 24 hours of the determination.

It cannot be urged strongly enough that accurate record keeping is a must.  In the event of a lawsuit for wrongful discharge, the keeping accurate records and other documentation is an absolute must.

Check out our complete menu of online training options. 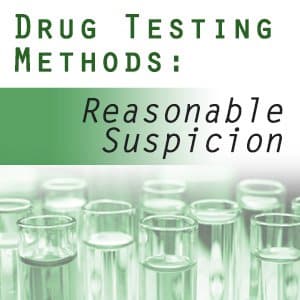