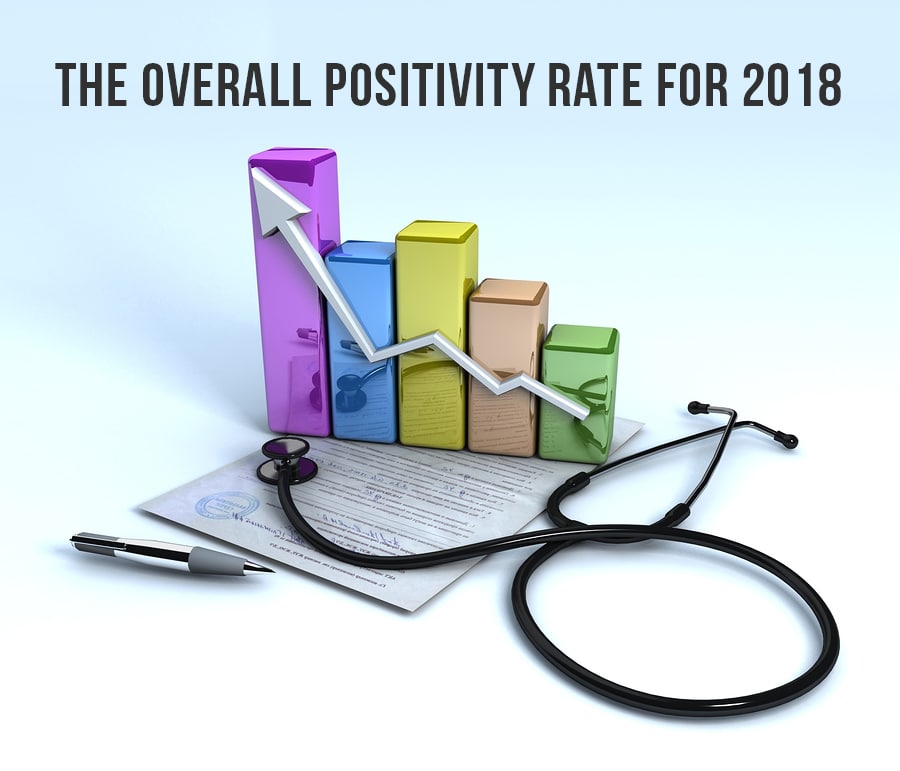 Every year, millions of people end up having to be screened for drugs via a 10 or 5 panel drug test. Usually, this is for pre-employment, but may also be due to random testing at work, post-accident testing, probation testing, or any other number of reasons. But while for these individuals it’s just a process of getting a test done, for those who work behind the scenes of the 5 panel drug test it’s important to look closer at the data and information from those tests.

In particular, looking at the nationwide positivity rate could be a key indicator for employers and for drug testing facilities who need to identify trends and be aware of the likelihood of positivity. The nationwide overall positivity chart allows you to look at national averages – 4.4% for 2018 – as well as individual state results for positive drug tests.

This map allows you to see exactly how many people ended up testing positive for a drug last year. This could mean any of the drugs tested for in a 5 panel drug test including marijuana, cocaine, amphetamines, opioids, and more. As mentioned above, for the 2018 year the entire country had a 4.4% positivity result, meaning that out of all the recorded drug screenings around 4.4% of those tested positive for some drug.

This data can also be applied to state levels, showing employers or others just what to expect in their drug screening efforts. For example, Maine has a positivity of 6.1%, higher than nearly every other state. Other states with high positivity results include Louisiana, North Carolina,and Oregon – which tops out at 6.5% positive.

What this means is that employers in those states need to consider being more vigilant during the hiring process or in the days following a workplace accident. Conversely, those in low-positive states can identify that they may not have as high of a risk.

Of course, there is no sure way of knowing just who is using drugs and who isn’t without running a 10 or 5 panel drug test on them. It’s the easiest way to ensure that you protect your business or your investment, and is an effective way to stay safe, lower insurance costs, and more.

Using the overall positivity rate for 2018 can unlock a lot of information and help you know more about your location and the rates of drug use at the moment.