One of the things many of us take for granted in the 21st century is the power of flight. A trip from New York to London no longer takes weeks and may involve storms, scurvy, and death. People that are injured in the woods can have a helicopter fly in to take them to the nearest medical facility in minutes.

However, just as with the department of transportation for ground-based vehicles, there is an organization in charge of air transportation. It’s called the Federal Aviation Administration, and there are policies in place for drug testing here that associated businesses should know about.

It’s All About Safety

As with the DOT, the FAA takes very seriously the responsibility of people that pilot vehicles capable of flight. When a plane crashes, the injuries and loss of life can be horrendous, and that is why every step to reduce the possibility of pilot error is taken. One of those measures is ensuring that pilots remain alert and responsive, and avoiding the use of drugs or alcohol is part of that.

As a result, the FAA has its own set of drug testing policies.

If you are in the business of:

You are one of many aerial-related professions and industries that must comply with FAA drug testing.

There are a lot of rules, regulations, and conditions to keep track of for companies, or the designated employee representative assigned to oversee these activities. One of the best ways to ensure that your business remains compliant with DOT-FAA requirements is to go to the experts.

The right company, if it has the experience and expertise, is fully briefed and informed on all DOT-FAA requirements, and can quickly get you up to speed on what you need to do to remain compliant. In some cases, such a company can even help to draft a good workplace policy that provides legal liability protection for the company, while at the same time observing the compliance required with DOT-FAA regulations. 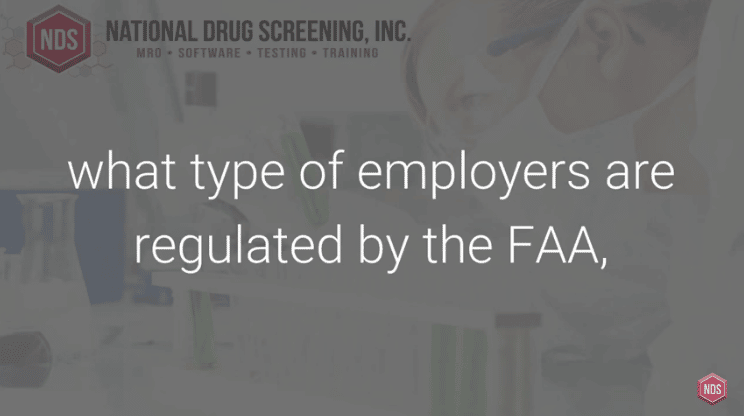 All Posts
PrevPreviousWhat Happens When You Get A Drug Test?
NextHair Follicle Testing & ETG Hair Tests For AlcoholNext