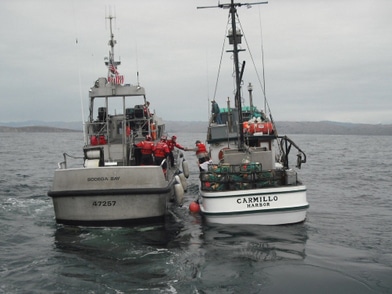 We left on a two day trip to go after the Bluefin tuna, a magnificent fish to catch that is very good to eat but a lot of work to catch.  That meant we left in the early evening to travel during the night to get to the fishing grounds.  That way the embarked passenger could take all day to fish to their heart’s content.  Then we would return to port steaming all night to be back a little after sunrise.

We got to the fishing grounds as planned and the fish finder showed where there was a large school of blue fin tuna.  I informed the anglers and gave some safety briefs on how to cast your line with live bait and not to hook another passenger with a hook as you are casting out your line.  With 25 passengers on board, safety is a must and that entails good fishing techniques.

The deckhands are busy showing the passengers how to put live bait on their hooks and how to cast their lines.   Soon we hear the zing of lines coming off of the reels as the tuna take the live bait.  Often times there would be over 600 feet of line going off of the reel before the tuna dives to the bottom.  Once that happens then it is man against the tuna to reel them in, all 600 plus feet of line with the tuna fighting every inch of the way.  It is hard task but a rewarding one as your tuna comes to the surface, sometimes after a 45 minute struggle.  The deckhands are busy bring the fish onboard and soon the deck is covered with the caught tuna, some of them weighing up to over 100 pounds.  The fishermen/passengers are having a great time.

All of a sudden I hear cry for help.  I immediately go to the source of the cry for help after turning control of the vessel over to the other captain.  I see a passenger on the deck with his leg looking like it is broken.  I clear away the other passengers, summon the deckhands after asking the passenger what happened.  The passenger told me that he slipped and his leg feels like it is broken.  I look at his right leg and it does look like it is broken being twisted at an odd angle.  I tell one of the deckhands to get the first aid kit and something to splint his leg in to make it immobile.  We manage to get the leg in a splint, then lift and carry him into the cabin.  The passenger is in a lot of pain. I give him a morphine Syrette to help ease the pain.  That does help.  I told one of the deckhands to inform the other captain to notify the Coast Guard that we needed medical assistance.  That notification is done.

The Coast Guard responded right away that they were sending a rescue helicopter out with a medic on board to assist.  We are about 50 miles away so it will take a few minutes for the helicopter to get here.

Because this was an incident that met the requirement of being a serious marine incident, that particular requirement was an injury to a passenger that requires professional medical treatment. We are now required to conduct drug and alcohol testing.

I break out the alcohol test kits and read the instructions on how to correctly use this test kits for alcohol.  I perform the tests on all of the crewmembers with negative results.  The other captain performed the same alcohol test on me with a negative test result.  All alcohol tests were performed within two hours of the incident.  I document the times the tests were done and the results in the vessel log book.  Now to get the drug tests collected.  Those tests have to be collected with 32 hours of the incident.  I start doing the paperwork to report this incident using the CG-2692 form to report the incident to the Coast Guard Investigating Officer (IO).  This report has to be done within five days of the incident.

We arrive back in port, off load the passengers and their catch of blue fin tuna.  I call the Coast Guard to inquire about the injured passenger and to talk to the IO.  The passenger is doing all right, soon to be released from the hospital with his right leg in a cast.  The IO asks me about the alcohol tests and I tell him that they were all negative and give him the manufacturer of the alcohol testing device that I used.

The IO asks about the drug tests and I tell him that the crew and I are on our way to get the tests done.  He reminds me that I need to submit the CG-2692 within five days and that the CG-2692 B will be submitted once all the drug test results have been received.  We talk about how the incident possibly occurred but he still has to interview the injured passenger.

The tests results re received in a few days and I report all the drug and alcohol test results to the IO.

What happens next will be discussed in the next article.