Drug-Free Work Week was initiated by the U.S. Department of Labor as a cooperative agreement focused on improving safety and health through drug-free workplace programs. The first Drug-Free Work Week was observed in 2006, and in subsequent years more and more organzations — representing a range of industries — also rallied behind the effort helping to firmly establish it as an annual opportunity to reinforce to employers and employees alike that “Drugs Don’t Work!”

Today, the National Drug-Free Workplace Alliance, a division of Drug Free America Foundation, in collaboration with organizations focused on alcohol and drug abuse prevention and workplace safety and health, promote this observance. Together we spread the word to encourage individual workplaces to conduct acitivies designed to educate and encourage a safe and healthy work environment – reflecting the true spirit of Drug-Free Work Week.

We hope that all organizations will take part in Drug-Free Work Week and will promote awareness of a substance-free workplace. To learn more about how to do so CLICK HERE

Substance use and abuse among workers

Substance abuse by employees results in:
• Higher health care expenses for injuries and illnesses;
• Higher rates of absenteeism;
• Reductions in job productivity and performance;
• More workers’ compensation and disability claims; and
• Safety and other risks for employers.

Employees with substance abuse issues often:
• Fail to fulfill major role obligations at work, school or home.
• Use substances in situations where it is physically hazardous (e.g. driving an automobile or operating a machine
when impaired by substance use).
• Have recurrent substance-related legal or financial problems.
• Continue to use substances despite persistent social or interpersonal problems that are a result of the
substance use.

Substance use and abuse is a concern for employers. Most drug users, binge and heavy drinkers, and people
with substance use disorders are employed.

Substance use and abuse is not necessarily limited to after work hours, leading to the risk of impairment on the job.

• An estimated 3.1 percent of employed adults actually used illicit drugs before reporting to work or during work
hours at least once in the past year, with about 2.9 percent working while under the influence of an illicit drug.
• An estimated 1.8 percent of employed adults consumed alcohol before coming to work, and 7.1 percent drank
alcohol during the workday. 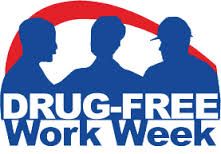