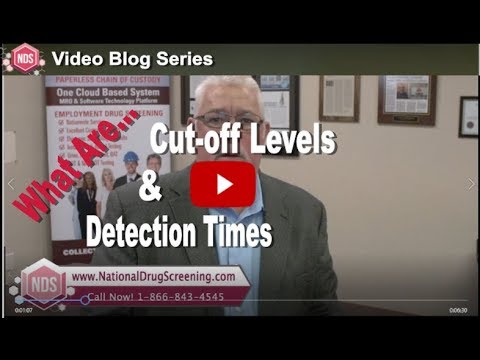 If you took one hit of a joint would you test positive for marijuana? And how long do drugs stay in your system? I’m Joe Reilly, President of National Drug Screening. Welcome to our video blog series. Today we’re going to talk about drug testing in relation to what we call cut off levels and detection times.

When we get a urine specimen or a hair specimen for a drug test at the laboratory, they’re testing for the metabolites of the various drugs that have broken down into your body as you smoked it, sniffed it, or injected it; the metabolites form in your urine or in your hair. At the laboratories, they have specific cut off levels they use when testing for these metabolites. So if the level of the metabolite in your specimen is above a certain number then that’s a positive result; if the level of the metabolite is below a certain number then that’s a negative result. Now there are different cutoff levels for different drugs. The reason is that cut off levels are used to give every benefit of the doubt to the person being drug tested. And cut off levels rule out things like secondhand smoke; they can also rule out things like over-the-counter medications so in the laboratory if you’re above the standard cutoff level you’re positive. These cut off levels are set by the federal government division of workplace programs or SAMHSA Substance Abuse Mental Health Services Administration and some of the cut off levels are as follows. For marijuana it’s 50 nanograms per milliliter on a screening test. For amphetamines it’s 500 nanograms; for oxycodone it’s 100 nanograms. You can see on the chart the cutoff levels for various drugs.

The screening cut off is the initial testing done at the laboratory and if it’s above that cutoff level it goes to a second type of test called a confirmation test. This test pinpoints the exact metabolite of a specific drug at an exact level that is in your system. And this rules out false positives. Now the cutoff levels aren’t relevant when you have a positive other than their positive; the level doesn’t tell you how much drug they used or when they used the drug. It tells you that at the time the specimen was collected, those metabolites were in that specimen. So typically in workplace drug testing the level at which someone is positive is irrelevant and not provided as part of the drug test result. A positive is a positive…and the drug free workplace policy should be followed. Now the next topic is detection times. How long do the drugs stay in your system? This varies from individual to individual.

You can see that marijuana is from two hours typically up to three or four days but someone that’s been smoking for a very long time, every day, then those metabolites are in their system and stored in their fat cells. And for that person, marijuana could be detectable up to 40 days while cocaine is detectable for two to three days and barbiturates up to 10 days.

And you see for the various drugs there are different detection times. It is important to note once again drug testing doesn’t tell us when someone uses the drugs. It could have been this morning; it could have been three days ago. Hair tests can go back up to 90 days. The detection times I showed you were for a urine test. We can also do oral fluid drug testing which will have shorter detection times of one to two days at maximum so oral fluid is a good specimen for a test for post accident or for reasonable suspicion where we’re trying to determine very recent drug use. Urine or a hair test is a good drug test for pre-employment or random drug testing. Work with a professional drug testing provider sometimes called a TPA and they’ll help you understand detection times and cut off levels. You can learn more about drug testing at National Drug Screening’s Web site. We have great blog articles and informational videos. Please visit us at www.NationalDrugScreening.com .