When urine, hair, or oral fluid sample is donated for drug testing, what is being searched for is the presence of metabolites. These are the leftover molecules after the body has processed a substance, and everything we take into ourselves, whether it is a burger, a sports drink, alcohol, or marijuana, will leave metabolites in our system for a certain amount of time.

Where testing results go to work is in looking to see if metabolites pass a certain cut off level, and detection time in our bodies. So how does this work?

The Benefit Of The Doubt

A negative result for a drug test doesn’t necessarily mean zero presence of a certain metabolite in the system. It actually means such metabolites, if present, were below a certain level considered as active drug use. This is because certain situations, such as a person inhaling second-hand smoke from marijuana, or having opioids in the system due to legitimate usage of a doctor-prescribed medicine, should not penalize people for something they didn’t do.

As a result, different cut-off levels have been determined for different drugs, as mandated by organizations such as the Federal government itself, or groups like the Substance Abuse Mental Health Services Administration. If a test is above the cut off level, that’s not instantly positive. Instead, to make absolutely sure, a second procedure, known as a confirmation test, is conducted to determine whether this is truly a positive result or a “false positive” due to error.

So now that we know that cut off levels are important, we should look at detection times, because, as time passes, metabolite levels of a drug drop. This can have a big impact on drug test results, though it also depends on the type of drug test administered.

Urine tests, for example, are not strongly recommended if a person is being tested for alcohol because the presence of alcohol metabolites in urine drop off sharply in just a matter of hours. On the other hand, getting a hair sample test for heroin can be very accurate even if the user hasn’t touched the drug for a month.

Depending on the individual, the type of drug screening test administered, and the type of drug being tested for, the times for easy positive/negative detection vary a lot. Always ask a professional about the specifics of this for your particular test. 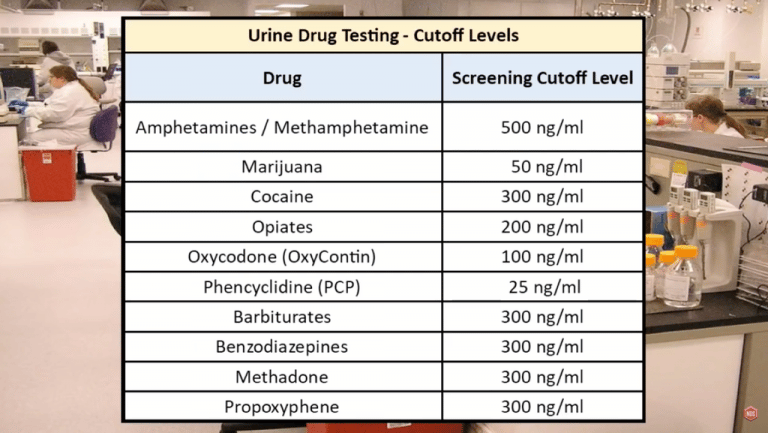