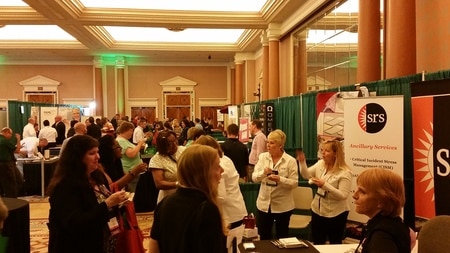 The 2016 DATIA conference in Las Vegas at Caesars Palace was a huge success.  There was record breaking attendance of over 800 attendees and over 60 exhibitors.  It was a Who’s Who of the drug testing industry.  All of the industry professionals who are serious about this industry were in attendance.

National Drug Screening was proud to exhibit at the conference with our management team all present – Julie Floriano, Tom Fulmer and Joe Reilly.  It was great to see many customers and to talk to and many others who signaled strong interest in our services.  The exhibits were open Tuesday 04/26/2016 from 4pm till 7pm and Wednesday from 12 noon to 3:15 PM.  Crowds were present Tuesday evening at each exhibitor booth. Quest Diagnostics sponsored the Tuesday exhibit session with great food and drink for all.

Tuesday evening featured a great hospitality suite hosted by Accredited Drug Screening, i3screen and National Drug Screening.  An outstanding evening of great food and drink included networking among several hundred attendees who stopped by before or after hitting the gaming tables.  The view overlooking the Fountains at Bellagio was fantastic.  If you missed this event don’t miss next year, mark it down for Tuesday May 16 2017 at the Rosen Shingle Creek – Orlando, Florida.

Wednesday morning came early in Vegas with the conference opening address by Sherri Vogler the incoming Madam Chairman for DATIA for the next two years. Sherri Vogler from Houston Medical Testing Services has been involved with DATIA since its inception in 1995. Chairman Phil Dubois handed over the gavel to Sherri.  The keynote speaker Mark Scharenbroich provided motivation with his motivational concept called “Nice Bike.”

Educational workshops continued all day Wednesday and Thursday with excellent presentations.  DOT officials from ODAPC and the DOT agencies were in attendance and all provided workshops on the DOT regulations and best practices.  Top notch industry professions shared their experience with educational sessions and updates regarding issues important to the drug and alcohol testing.

Just after the workshops on Wednesday, Alere Toxicology entertained attendees with cocktails, food and gaming tables.  Practice makes perfect so many were able to try their skills before heading out to the actual casino floor to win or lose real cash.  Others passed by the casino floor directly to the Colosseum at Caesars Palace for a spectacular performance by Elton John.  Phil Dubois outgoing Chairman of DATIA and Executive Vice President of Drug Scan and DSI Medical Services provided hospitality in his Suite in the Palace Tower.

The 2016 DATIA conference was the drug testing industry event of the year.  The DATIA team led by Laura Shelton – DATIA’s Executive Director did an amazing job with this conference.  The team continued to work on Friday with another round of DATIA educational courses. Don’t miss future DATIA conferences, they are an annual opportunity to learn, network and take advantage a few days of all things drug testing.